Dentistry is a branch of medicine that consists of the study, diagnosis, prevention, and treatment of diseases, disorders and conditions of the oral cavity, commonly in the dentition but also the oral mucosa, and of adjacent and related structures and tissues, particularly in the maxillofacial (jaw and facial) area. Although primarily associated with teeth among the general public, the field of dentistry or dental medicine is not limited to teeth but includes other aspects of the craniofacial complex including the temperomandibular and other supporting structures. 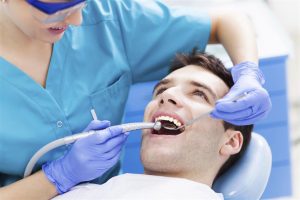 Dentistry is often also understood to subsume the now largely defunct medical specialty of stomatology (the study of the mouth and its disorders and diseases) for which reason the two terms are used interchangeably in certain regions.

The history of dentistry is almost as ancient as the history of humanity and civilization with the earliest evidence dating from 7000 BC. Remains from the early Harappan periods of the Indus Valley Civilization (c. 3300 BC) show evidence of teeth having been drilled dating back 9,000 years. It is thought that dental surgery was the first specialization from medicine.

Dentistry usually encompasses practices related to the oral cavity. According to the World Health Organization, oral diseases are major public health problems due to their high incidence and prevalence across the globe, with the disadvantaged affected more than other socio-economic groups.

The majority of dental treatments are carried out to prevent or treat the two most common oral diseases which are dental caries (tooth decay) and periodontal disease (gum disease or pyorrhea). Common treatments involve the restoration of teeth, extraction or surgical removal of teeth, scaling and root planning and endodontic root canal treatment.

All dentists in the United States undergo at least three years of undergraduate studies, but nearly all complete a bachelor’s degree. This schooling is followed by four years of dental school to qualify as a “Doctor of Dental Surgery” (DDS) or “Doctor of Dental Medicine” (DMD). Dentists need to complete additional qualifications or continuing education to carry out more complex treatments such as sedation, oral and maxillofacial surgery, and dental implants.

By nature of their general training they can carry out the majority of dental treatments such as restorative (fillings, crowns, bridges), prosthetic (dentures), endodontic (root canal) therapy, periodontal (gum) therapy, and extraction of teeth, as well as performing examinations, radiographs (x-rays) and diagnosis. Dentists can also prescribe medications such as antibiotics, sedatives, and any other drugs used in patient management.

Irreversible enamel defects caused by an untreated celiac disease. They may be the only clue to its diagnosis, even in absence of gastrointestinal symptoms, but are often confused with fluorosis, tetracycline discoloration, or other causes. The National Institutes of Health include a dental exam in the diagnostic protocol of celiac disease. 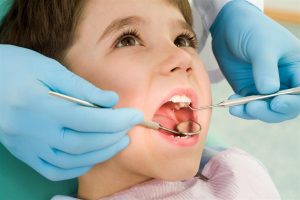 Dentists also encourage prevention of oral diseases through proper hygiene and regular, twice yearly, checkups for professional cleaning and evaluation. Oral infections and inflammations may affect overall health and conditions in the oral cavity may be indicative of systemic diseases, such as osteoporosis, diabetes, celiac disease or cancer. Many studies have also shown that gum disease is associated with an increased risk of diabetes, heart disease, and preterm birth. The concept that oral health can affect systemic health and disease is referred to as “oral-systemic health”.

Dr. John M. Harris started the world’s first dental school in Bainbridge, Ohio, and helped to establish dentistry as a health profession. It opened on 21 February 1828, and today is a dental museum. The first dental college, Baltimore College of Dental Surgery, opened in Baltimore, Maryland, US in 1840. The second in the United States was the Philadelphia College of Dental Surgery, established in 1852. In 1907, Temple University accepted a bid to incorporate the school.

In the United Kingdom, the 1878 British Dentists Act and 1879 Dentists Register limited the title of “dentist” and “dental surgeon” to qualified and registered practitioners. However, others could legally describe themselves as “dental experts” or “dental consultants”. The practice of dentistry in the United Kingdom became fully regulated with the 1921 Dentists Act, which required the registration of anyone practising dentistry. The British Dental Association, formed in 1880 with Sir John Tomes as president, played a major role in prosecuting dentists practising illegally. Dentists in the United Kingdom are now regulated by the General Dental Council.

In Korea, Taiwan, Japan, Finland, Sweden, Brazil, Chile, the United States, and Canada, a dentist is a healthcare professional qualified to practice dentistry after graduating with a degree of either Doctor of Dental Surgery (DDS) or Doctor of Dental Medicine (DMD). This is equivalent to the Bachelor of Dental Surgery/Baccalaureus Dentalis Chirurgiae (BDS, BDent, BChD, BDSc) that is awarded in the UK and British Commonwealth countries. In most western countries, to become a qualified dentist one must usually complete at least four years of postgraduate study; within the European Union the education has to be at least five years. Dentists usually complete between five and eight years of post-secondary education before practising. Though not mandatory, many dentists choose to complete an internship or residency focusing on specific aspects of dental care after they have received their dental degree.

Some dentists undertake further training after their initial degree in order to specialize. Exactly which subjects are recognized by dental registration bodies varies according to location. Examples include:

Forensic odontology – The gathering and use of dental evidence in law. This may be performed by any dentist with experience or training in this field. The function of the forensic dentist is primarily documentation and verification of identity.

Geriatric dentistry or Geriodontics – The delivery of dental care to older adults involving the diagnosis, prevention, and treatment of problems associated with normal aging and age-related diseases as part of an interdisciplinary team with other health care professionals.

Oral Implantology – The art and science of replacing extracted teeth with dental implants.

Orthodontics and dentofacial orthopedics – The straightening of teeth and modification of midface and mandibular growth.

Prosthodontics (also called prosthetic dentistry) – Dentures, bridges and the restoration of implants. Some prosthodontists further their training in “oral and maxillofacial prosthodontics”, which is the discipline concerned with the replacement of missing facial structures, such as ears, eyes, noses, etc.

Veterinary dentistry, a speciality of veterinary medicine – The field of dentistry applied to the care of animals.