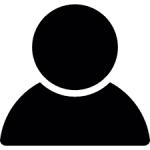 Surgery (from the Greek: χειρουργική cheirourgikē (composed of χείρ, “hand”, and ἔργον, “work”), via Latin: chirurgiae, meaning “hand work”) is a medical specialty that uses operative manual and instrumental techniques on a patient to investigate or treat a pathological condition such as a disease or injury, to help improve bodily function or appearance or to repair unwanted ruptured areas.

The act of performing surgery may be called a “surgical procedure”, “operation”, or simply “surgery”. In this context, the verb “operate” means to perform surgery. The adjective “surgical” means pertaining to surgery; e.g. surgical instruments or surgical nurse. The patient or subject on which the surgery is performed can be a person or an animal.

A surgeon is a person who practices surgery and a surgeon’s assistant is a person who practices surgical assistance. A surgical team is made up of surgeon, surgeon’s assistant, anesthesia provider, circulating nurse and surgical technologist. Surgery usually spans minutes to hours, but it is typically not an ongoing or periodic type of treatment. The term “surgery” can also refer to the place where surgery is performed, or simply the office of a physician, dentist, or veterinarian.

Surgery is a technology consisting of a physical intervention on tissues.

As a general rule, a procedure is considered surgical when it involves cutting of a patient’s tissues or closure of a previously sustained wound. Other procedures that do not necessarily fall under this rubric, such as angioplasty or endoscopy, may be considered surgery if they involve “common” surgical procedure or settings, such as use of a sterile environment, anesthesia, antiseptic conditions, typical surgical instruments, and suturing or stapling. All forms of surgery are considered invasive procedures; so-called “noninvasive surgery” usually refers to an excision that does not penetrate the structure being excised (e.g. laser ablation of the cornea) or to a radiosurgical procedure (e.g. irradiation of a tumor).

Based on timing: Elective surgery is done to correct a non-life-threatening condition, and is carried out at the patient’s request, subject to the surgeon’s and the surgical facility’s availability. A semi-elective surgery is one that must be done to avoid permanent disability or death but can be postponed for a short time. Emergency surgery is surgery which must be done promptly to save the life, limb, or functional capacity.

Based on purpose: Exploratory surgery is performed to aid or confirm a diagnosis. Therapeutic surgery treats a previously diagnosed condition. Cosmetic surgery is done to subjectively improve the appearance of an otherwise normal structure.

By degree of invasiveness of surgical procedures: Minimally-invasive surgery involves smaller outer incision(s) to insert miniaturized instruments within a body cavity or structure, as in laparoscopic surgery or angioplasty. By contrast, an open surgical procedure such as a laparotomy requires a large incision to access the area of interest.

By equipment used: Laser surgery involves use of a laser for cutting tissue instead of a scalpel or similar surgical instruments. Microsurgery involves the use of an operating microscope for the surgeon to see small structures. Robotic surgery makes use of a surgical robot, such as the Da Vinci or the Zeus surgical systems, to control the instrumentation under the direction of the surgeon.

Excision surgery names often start with a name for the organ to be excised (cut out) and end in -ectomy. Procedures involving cutting into an organ or tissue end in -otomy. A surgical procedure cutting through the abdominal wall to gain access to the abdominal cavity is a laparotomy. Minimally invasive procedures involving small incisions through which an endoscope is inserted end in -oscopy. For example, such surgery in the abdominal cavity is called laparoscopy. Procedures for formation of a permanent or semi-permanent opening called a stoma in the body end in -ostomy.

Repair of damaged or congenital abnormal structure ends in -reply. 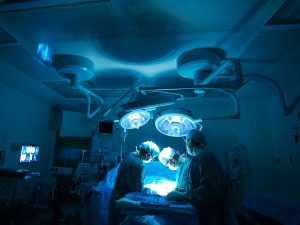 At a hospital, modern surgery is often performed in an operating theater using surgical instruments, an operating table for the patient, and other equipment. Among United States hospitalizations for nonmaternal and nonneonatal conditions in 2012, more than one-fourth of stays and half of hospital costs involved stays that included operating room (OR) procedures. The environment and procedures used in surgery are governed by the principles of aseptic technique: the strict separation of “sterile” (free of microorganisms) things from “unsterile” or “contaminated” things. All surgical instruments must be sterilized, and an instrument must be replaced or re-sterilized if it becomes contaminated (i.e. handled in an unsterile manner, or allowed to touch an unsterile surface). Operating room staff must wear sterile attire (scrubs, a scrub cap, a sterile surgical gown, sterile latex or non-latex polymer gloves and a surgical mask), and they must scrub hands and arms with an approved disinfectant agent before each procedure.

Prior to surgery, the patient is given a medical examination, receives certain pre-operative tests, and their physical status is rated according to the ASA physical status classification system. If these results are satisfactory, the patient signs a consent form and is given a surgical clearance. If the procedure is expected to result in significant blood loss, an autologous blood donation may be made some weeks prior to surgery. If the surgery involves the digestive system, the patient may be instructed to perform a bowel prep by drinking a solution of polyethylene glycol the night before the procedure. Patients are also instructed to abstain from food or drink (an NPO order after midnight on the night before the procedure), to minimize the effect of stomach contents on pre-operative medications and reduce the risk of aspiration if the patient vomits during or after the procedure.

Some medical systems have a practice of routinely performing chest x-rays before surgery. The premise behind this practice is that the physician might discover some unknown medical condition which would complicate the surgery, and that upon discovering this with the chest x-ray, the physician would adapt the surgery practice accordingly. In fact, medical specialty professional organizations recommend against routine pre-operative chest x-rays for patients who have an unremarkable medical history and presented with a physical exam which did not indicate a chest x-ray. Routine x-ray examination is more likely to result in problems like misdiagnosis, overtreatment, or other negative outcomes than it is to result in a benefit to the patient. Likewise, other tests including complete blood count, prothrombin time, partial thromboplastin time, basic metabolic panel, and urinalysis should not be done unless the results of these tests can help evaluate surgical risk.

After completion of surgery, the patient is transferred to the post anesthesia care unit and closely monitored. When the patient is judged to have recovered from the anesthesia, he/she is either transferred to a surgical ward elsewhere in the hospital or discharged home. During the post-operative period, the patient’s general function is assessed, the outcome of the procedure is assessed, and the surgical site is checked for signs of infection. There are several risk factors associated with postoperative complications, such as immune deficiency and obesity. Obesity has long been considered a risk factor for adverse post-surgical outcomes. It has been linked to many disorders such as obesity hypoventilation syndrome, atelectasis and pulmonary embolism, adverse cardiovascular effects, and wound healing complications. If removable skin closures are used, they are removed after 7 to 10 days post-operatively, or after healing of the incision is well under way.

It is not uncommon for surgical drains to be required to remove blood or fluid from the surgical wound during recovery. Mostly these drains stay in until the volume tapers off, then they are removed. These drains can become clogged, leading to the abscess.

Postoperative therapy may include adjuvant treatment such as chemotherapy, radiation therapy, or administration of medication such as anti-rejection medication for transplants. Other follow-up studies or rehabilitation may be prescribed during and after the recovery period.

Through a retrospective analysis of national administrative data, the association between mortality and day of elective surgical procedure suggests a higher risk in procedures carried out later in the working week and on weekends. The odds of death were 44% and 82% higher respectively when comparing procedures on a Friday to a weekend procedure. This “weekday effect” has been postulated to be from several factors including poorer availability of services on a weekend, and also, decrease number and level of experience over a weekend.